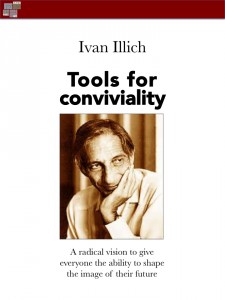 For the never forgotten master Ivan Illich, born in Vienna in 1926, the convivial society is one in which the tools available to the community are lived and used by all the people who are part of it and not produced and controlled by the specialists of the society dominated by the ideology of development and industrial productivity without limits. Conviviality, therefore, is the individual freedom that actually manages to be achieved in the production relationship within the framework of organized structures equipped with effective tools available to the entire community of society.
The planetary crisis evoked by Illich is caused by the replacement of the technological tool by the action of human beings, characteristic of the modern enterprise: in the man-machine-society triad, man becomes a slave to the machine and hyper-industrial society no longer respects natural limits, while hyper-productivity becomes counterproductive and generates the economic, political and social crisis.
In such a society, the authenticity, intimacy and freedom of men and women is denied by the tools that hinder human conviviality.
The alternative to this world dominated by an increasingly artificial environment, where human beings transmit messages without actually and emotionally communicating anymore, is the convivial society, meaning by conviviality the opposite of industrial productivity and the transition from productivity to conviviality is the passage from repetition to gift spontaneity. Therefore, moving from productivity to conviviality means substituting an ethical value for a technical value, a realized value for a materialized value.